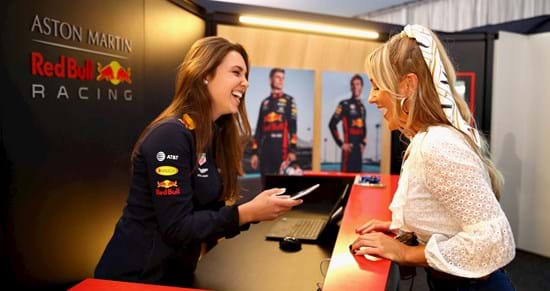 Silverstone circuit is known as The home of British motorsport. The Northamptonshire based circuit hosted the first ever round of the World Championship in 1950, and has been the permanent host of the British GP since the late 1980s.

Silverstone is still one of the F1™ calendar's fastest circuits, with average speeds of up to 145 mph and as such remains one of the world's premier motor racing events.

The Formula 1 British Grand Prix remains one of the highlights of the sporting summer. Over 150,000 fans were at Silverstone to witness Lewis Hamilton win on home soil in 2021.

In 2022 we have some excellent hospitality packages available at Silverstone. Experience VIP hospitality at Silverstone Live, our exclusive suite located at Silverstone Six. Here our VIP guests have access to a grandstand seat in a prime position to watch the race, with panoramic views of 6 corners. Alternatively rub shoulders with F1 team personnel with a weekend pass at Formula One Paddock Club™ - or for that extra special experience you can watch the drama unfold as you join one of the teams for 3 days of unforgettable action.

It would be hard to find a more exciting venue than Silverstone Six, for making new contacts & forging lasting relationships with key clients.

It was a brilliant day which was enjoyed by all my guests. All of us arrived and left Silverstone without any hold ups which in itself was a very pleasant surprise, I think we all were expecting to be caught in some traffic on the way out, but the hospitality car park makes it so easy! I'd recommend Silverstone Six hospitality for anyone wanting to give their guests a memorable day out.

Having attended the British GP on several previous occasions, I decided to try a new approach with Red Eye and the Silverstone Six package. I was hugely impressed with the day and it was by far and away my best experience of attending the GP to date. I would strongly recommend the Red Eye Hospitality at Silverstone and look forward to next year's event.